5 Minutes To: Ambient Advertisements and where to find them

We know that digital marketing is an integral part of any brand’s promotional strategy – especially in today’s technology-driven landscape. Equally, a brand must also nurture its offline presence. Sometimes, you have to be innovative to grab your audience’s attention, and one method that genuinely rewards creativity is Ambient advertising.

This article takes a brief look into the ingenious world of Ambient advertising that truly takes ‘outside the box’ thinking to the next level.

So what exactly is ambient advertising?

Ambient advertising is fundamentally a form of Out of Home advertising (OOH) – basically, anything that isn’t online, i.e. posters, billboards, flyers etc. However, Ambient advertising stands firmly on its own. Whilst typical OOH adverts tend to be placed in areas that will reach the greatest audience (everyday places like train stations, shopping centres etc.), Ambient advertisements catapult the viewer from an ordinary space into a parallel world. By utilising unusual objects as advertisements and placing ads in unusual places, consumers are taken by surprise on their everyday commutes. Whether it’s using a plant pot-shaped like a teapot to hang an oversized tea bag (Movia Media 2019) or turning a door handle in a public space into a pint of beer (Bored Panda), there are endless ways to engage this method of marketing. The surprise value generated by these adverts lead to greater, longer-lasting impressions, increased positive brand association and an ultimately better chance of future consumer engagement with the brand. Ambient advertising is a perfect mix of surprise and delight advertising that favours the brave and innovative marketeers who choose to use it. 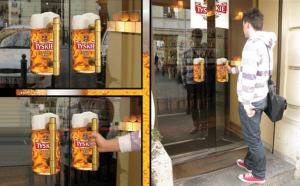 Ambient advertising isn’t always about generating surprise or shock value. Often the most successful ambient campaigns are those that feel seamless within the physical environment. Ambient advertising can be about subtlety. The placement of these ads will still likely surprise the audience. However, they won’t look out of place. The ads should conform to the environment, so whilst it appears unusual, it makes sense. The link between the advert’s messaging, and the ad’s physical manifestation should make sense to the consumer as to why it has been placed there. Take, for instance, Kit Kat’s breaker benches campaign in the Philippines. By installing nearly 500 Kit Kat benches, all featuring different types of break activities (check out the video below), the “take-a-break” brand message was brought to life.

In the case of the above, the viewer becomes immersed in the advertisement, which should encourage a memorable and positive association with the brand.

If, like me, you were one of the many people who saw 2020’s year of lockdowns as an opportunity to binge on Netflix unapologetically, then you might be no stranger to the show Money Heist. However, if you spent your time more productively and are unfamiliar with the show – Money Heist is a modern-day Robin Hood adaptation – but in Spanish. It has one of the most iconic outfits in Television – the Salvador Dali mask and red jumpsuit combo. What better way to reinforce brand identity than to build a 15-meter statue in the middle of Milan 2 days before the launch of the third series?

The installation was erected overnight and took everyone by surprise in the morning, drawing in flocks of intrigued onlookers to take a closer look but, more importantly, prompting them to share the extraordinary scene on social media. I mean, who isn’t going to post a picture of a 15 meter Salvador Dali masked person on instagram.

In this case, the social media effect was the return on investment from this method of marketing. During the official launch period (18th to 22nd of July), more than 57.3K posts were published, generating over 1.6 million interactions. LBB Online 2019. These are metrics that have a significant impact on any campaign’s success. And while obviously, this example is on a vast scale (and budget), it is a great example that highlights the social media footprint generated from this form of advertising. Whilst digital advertisements generate these metrics directly, there is still a lot to say for physical advertisements as part of any marketing campaign.

If you’re thinking about introducing ambient advertising to your marketing campaign or would like advice on how to improve your current marketing strategy, get in touch with Beacon at hello@beaconagency.co.uk